Gabriel is a graduate of the Little Dragons program – This is his excellent performance of the Kata at the recent Youth American Karate-do rank testing. Gabriel was awarded his Yellow Belt with Honorable Mention in Kata
Let’s Keep In Touch: 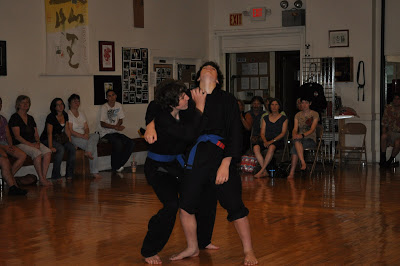 Andrew and Scott G. get my ‘most improved’ award! Truly an amazing transformation with uprgrades visable everywhere. Keep up the great work guy’s ;>) Sifu 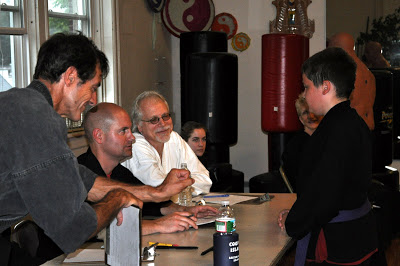 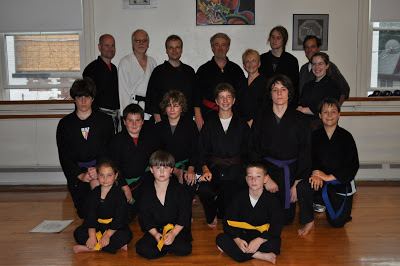 One of the main purposes of T’ai-Chi, Bagua, Standing Meditation and Qigong is to increase and evenly distribute blood flow (oxygen) to the brain through proven techniques like: Taoist Longevity Breathing, proper alignment of the bone structure, relaxed (Sung) and open (Peng) body musculature and slow even movements. The practices also reduce the amount of stress and strain on the joints, muscles, nervous system (s) and brain, by inducing a calm and relaxed state of mind (meditation) that will lead to clearer and more lucid thinking….. perhaps even increasing one’s mental abilities??? This article seems to think so! Read on…….

“What goes on inside your brain when you exercise? That question
has preoccupied a growing number of scientists in recent years, as
well as many of us who exercise. In the late 1990s, Dr. Fred Gage
and his colleagues at the Laboratory of Genetics at the Salk Institute
in San Diego elegantly proved that human and animal brains
produce new brain cells (a process called neurogenesis) and that
exercise increases neurogenesis. The brains of mice and rats that
were allowed to run on wheels pulsed with vigorous, newly born
neurons, and those animals then breezed through mazes and other
tests of rodent I.Q., showing that neurogenesis improves thinking.
But how, exactly, exercise affects the staggeringly intricate workings
of the brain at a cellular level has remained largely mysterious. A
number of new studies, though, including work published this
month by Mr. Gage and his colleagues, have begun to tease out the
specific mechanisms and, in the process, raised new questions about
just how exercise remolds the brain.
Some of the most reverberant recent studies were performed at
Northwestern University’s Feinberg School of Medicine in Chicago.
There, scientists have been manipulating the levels of bonemorphogenetic
protein or BMP in the brains of laboratory mice.
BMP, which is found in tissues throughout the body, affects cellular
development in various ways, some of them deleterious. In the
brain, BMP has been found to contribute to the control of stem cell
divisions. Your brain, you will be pleased to learn, is packed with
adult stem cells, which, given the right impetus, divide and
differentiate into either additional stem cells or baby neurons. As we
age, these stem cells tend to become less responsive. They don’t
divide as readily and can slump into a kind of cellular sleep. It’s
BMP that acts as the soporific, says Dr. Jack Kessler, the chairman
of neurology at Northwestern and senior author of many of the
recent studies. The more active BMP and its various signals are in
your brain, the more inactive your stem cells become and the less
neurogenesis you undergo. Your brain grows slower, less nimble,
older.
But exercise countermands some of the numbing effects of BMP, Dr.
Kessler says. In work at his lab, mice given access to running wheels
had about 50 percent less BMP-related brain activity within a week.
They also showed a notable increase in Noggin, a beautifully named
brain protein that acts as a BMP antagonist. The more Noggin in
your brain, the less BMP activity exists and the more stem cell
divisions and neurogenesis you experience. Mice at Northwestern
whose brains were infused directly with large doses of Noggin
became, Dr. Kessler says, “little mouse geniuses, if there is such a
thing.” They aced the mazes and other tests.
Whether exercise directly reduces BMP activity or increases
production of Noggin isn’t yet known and may not matter. The
results speak for themselves. “If ever exercise enthusiasts wanted a
rationale for what they’re doing, this should be it,” Dr. Kessler says.
Exercise, he says, through a complex interplay with Noggin and
BMP, helps to ensure that neuronal stem cells stay lively and new
brain cells are born.
But there are caveats and questions remaining, as the newest
experiment from Dr. Gage’s lab makes clear. In that study,
published in the most recent issue of Cell Stem Cell, BMP signaling
was found to be playing a surprising, protective role for the brain’s
stem cells. For the experiment, stem cells from mouse brains were
transferred to petri dishes and infused with large doses of Noggin,
hindering BMP activity. Without BMP signals to inhibit them, the
stem cells began dividing rapidly, producing hordes of new neurons.
But over time, they seemed unable to stop, dividing and dividing
again until they effectively wore themselves out. The same reaction
occurred within the brains of living (unexercised) mice given large
doses of Noggin. Neurogenesis ramped way up, then, after several
weeks, sputtered and slowed. The “pool of active stem cells was
depleted,” a news release accompanying the study reported. An
overabundance of Noggin seemed to cause stem cells to wear
themselves out, threatening their ability to make additional neurons
in the future.
This finding raises the obvious and disturbing question: can you
overdose on Noggin by, for instance, running for hours, amping up
your production of the protein throughout? The answer, Dr. Gage
says, is, almost certainly, no. “Many people have been looking into”
that issue, he says. But so far, “there has not been any instance of a
negative effect from voluntary running” on the brain health of mice.
Instead, he says, it seems that the effects of exercise are constrained
and soon plateau, causing enough change in the activity of Noggin
and BMP to shake slumbering adult stem cells awake, but not
enough to goose them into exhausting themselves.
Still, if there’s not yet any discernible ceiling on brain-healthy
exercise, there is a floor. You have to do something. Walk, jog, swim,
pedal — the exact amount or intensity of the exercise required has
not been determined, although it appears that the minimum is
blessedly low. In mice, Mr. Gage says, “even a fairly short period” of
exercise “and a short distance seems to produce results”
by Gretchen Reynolds – New York Times
Let’s Keep In Touch: